In Erranza is a project by Marzia Migliora and Luigi Coppola for the second edition of the Saluzzo Rural Happening project curated by Rebecca De Marchi. The project – through a series of research residencies and meetings along the Varaita and Po Valleys – is a research on migratory processes, geological, historical and chronicle times that have been stratified in a path leading from the Saluzzo plain, where intensive fruit production is practised, to the Varaita and Po Valleys where the scale of actions is reduced to the search for ecosystem alliances. The map we have developed translates these data, encounters and experiences into the spaces and folds of the map. They combine representations and data with signs and words that open us up to a different imaginary. To err is to allow oneself the possibility of deviating, of straying from a known path to embark on a journey of discovery, of doubt, of research. 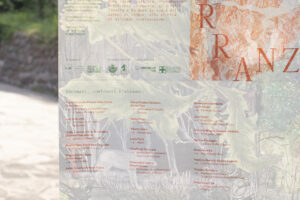 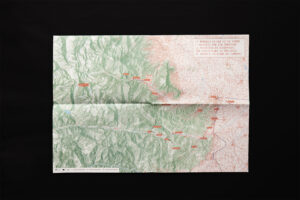 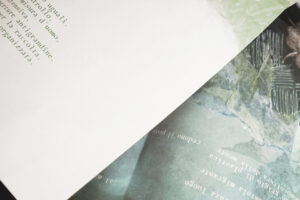 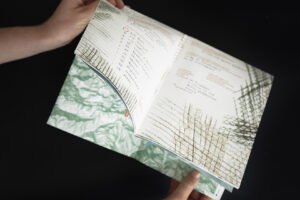 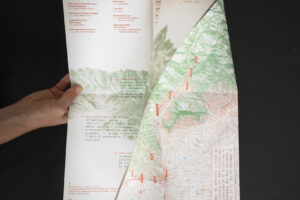 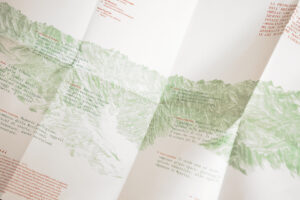 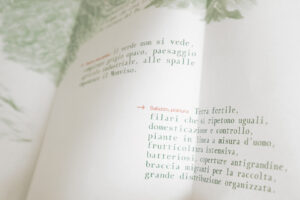 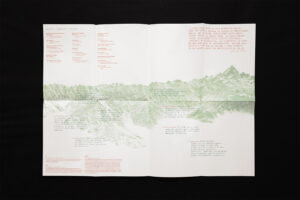 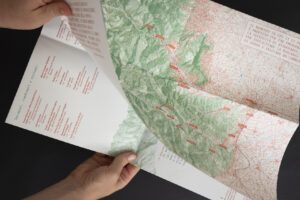 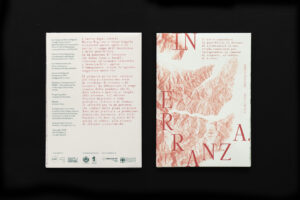 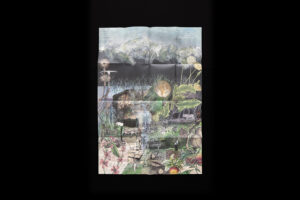 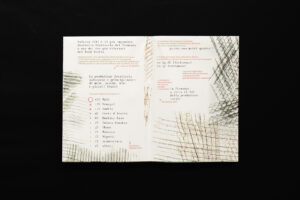 Saluzzo is the most impressive fruit-growing district in Piedmont and one of the three most important in northern Italy. The identity of this territory is based on a profound contrast between the intensive cultivation of the plains and the experiences of the mountains. There is also a strong visual contrast between the valleys and Monviso, which characterises the entire territory and dominates the areas around Saluzzo. Based on this idea of contrast and union, we have described the territory through the use of two colours that move to create a tension between the full green of the mountains and the brown-red colour of a warm and tired land. The images, stories and encounters of the artists have been reported within the portions of the map following a path from Saluzzo to complete abstraction. To tell the story, we have chosen to use a dry and radical typography that breaks the grid and is bypassed by a system of almost imaginary symbols that question the signs and language of traditional and modern cartography.

The map is designed to move through five formats: from the smallest (A5) to the largest (A1). It is possible to read it by opening each portion clockwise as if it were a book and this movement represents the path taken by the artists, not only through physical space, but also through visualisations of the territory that go from the sign, to the orthogonal view, to the three-dimensional view of the volumes of the mountain ranges up to the most complete abstraction given by the union of Marzia Migliora’s collage and Luigi Coppola’s verses that stand out in the grey blue sky above the mountains.

The visualisations of the territory have been taken care of in detail to represent the various levels of information and narrative, always trying to maintain this mixture between the language of cartography and imagination. For example, in the first format – A4 – the marks and traces of the plastic fibre sacks used in the harvesting of fruit and wheat enter from the margins of the page, serving as the basis for some of the crop production data. In the second format – the A3 – a two-dimensional map was drawn up in which the fragmentation of the fruit-growing district emerges, exacerbated at the foot of the imposing green area. In this visualisation, we have related the levels of the green areas, the water and the cultivated areas with the path of discovery and encounter taken by the artists on their way. In the third format – the A2 – the valleys and the entire mountain chain of Monviso stand on half of the three-dimensional sheet and thus become the container of impressions, of encounters, collected along the points of the route up to the total abstraction that comes when the map is opened up completely. It is a journey, a collection, a quest that moves through the dimensions and folds of a very light sheet of paper. 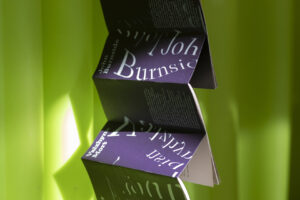 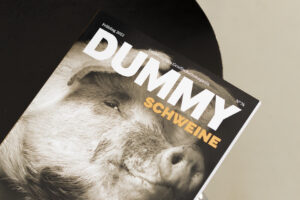 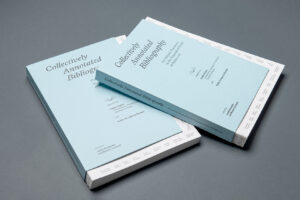